The latest version of GMapsFX has been released which contains a fix for a bug that was preventing the GoogleMapView component from being added as a custom component to SceneBuilder.

The fix will allow the MapView to be added as a custom component.  In a future blog post I will detail how to do this.

Mapping an address in a JavaFX application is extremely easy with the Geocoding API that was recently introduced in GMapsFX.  In this blog post I’ll walk through an example of setting up an application with a map and a text field.  The map will recenter itself at whatever address or place the user types in the text field.

Starting off with the FXML file, we have an AnchorPane which contains the GoogleMapView and a TextField.  The AnchorPane has a controller assigned to it named FXMLController, and both components have an FX ID associated with them so they will be accessible from the FXMLController class.  Also, the TextField has an action, “addressTextFieldAction” associated with it, so this method will be called when the user hits the ‘Enter’ key in the TextField.

The result should look as follows:

Next, I’ve cut up the relevant parts of the FXMLController class.  The MapComponentInitializedListener interface needs to be implemented by the controller since the underlying GoogleMap doesn’t get initialized immediately.  The GoogleMapView and TextField components from the FXML file are defined below and annotated with @FXML.

There is also a reference to the GeocodingService as well as a StringProperty to represent the address the user enters.

After the controller is created its initialize method is called which will set the MapView’s initialization listener to the FXMLController as well as bind the address property to the address TextField’s text property.

Finally, the action method defined in the FXML file when the user hits ‘Enter’ in the TextField is below.  The method will call the geocode() method on the GeocodeService class, passing in the value of the Address property as well as a callback method.

The callback will check the status of the results, and based on the outcome, will recenter the map at the latitude/longitude the user had entered.

Below is an example when the user enters New York City as the address.

That’s it!  For completeness I’ll include the full source code of the example below.

A new version of GMapsFX has been released to bintray and Maven Central.  The main feature in this version is to allow the use of custom marker/pin images, rather than relying on the default Google images.

A future blog post will demonstrate how to add custom markers to your GMapsFX application.

GMapsFX 2.0.5 has been released and is now available via bintray and maven central.

This version contains a major bugfix where the directions pane was always enabled.  The framework has been updated to make the direction pane an option that can be toggled on or off at runtime as it is needed.

GMapsFX is a Java library that makes it extremely easy to add a Google Map to a JavaFX application. 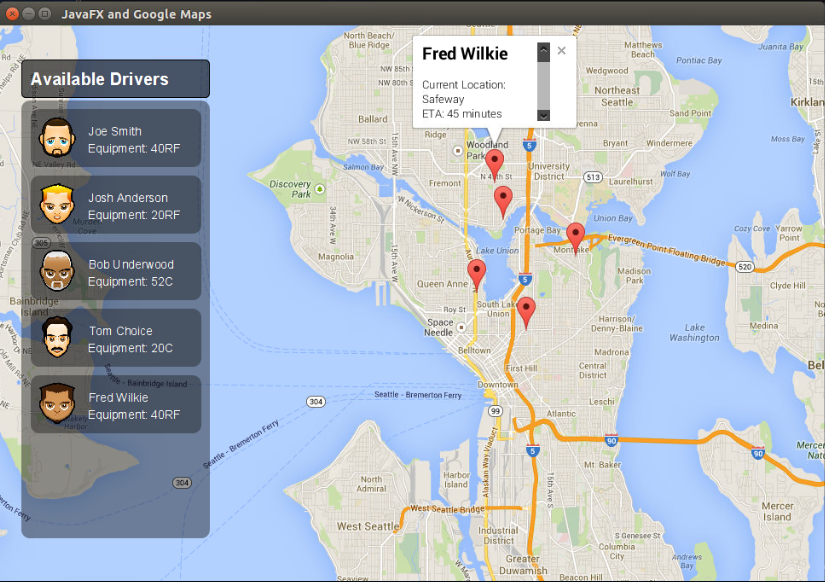 As we have started moving to a service based architecture, we have been developing processes to create and configure our infrastructure in a predictable and repeatable way using Vagrant and Chef.  One challenge that we have faced is trying to replicate a production Wildfly server on a dev box, including the applications are installed on it and their correct versions.

Ideally, we’d like the developer to be able to specify which server they want to clone when kicking off the Chef process.  Chef would then create a new Wildfly instance and download and install all the web applications running on the specified instance.

The first question Chef will need to know, is “what what Wildfly servers are running on the network?”  The next question is then, “which applications, and what versions are installed on those servers?”

A rough diagram of the architecture appears below.

In the example, there are 3 Wildfly instances, lisprod01, 02, and 03, which are reporting their applications to the registry. The table below the DB illustrates how the data is organized by server, and then by applications, with each Wildfly instance is running 2 applications.    The WildflyRegistry REST service then makes this information available to any client on the network, including Chef recipes.

The next step is then to modify the Chef script

The snippet above shows the script contacting the REST service, looping through all the servers that were returned until the desired server to clone is found.  Once the server is found, the script loops through that server’s list of applications and creates a list of hashes with the app name mapped to its version number.

Next, the script loops through each of the apps which were discovered in the previous snippet.

First the script constructs the URL to the web app in our Nexus repository. The script then downloads each web app to the tmp folder on the server.  The script then calls a shell script which deploys the applications to Wildfly utilizing the Wildfly command line interface.

The shell script which is called by Chef to perform the actual deployment to Wildfly is fairly straightforward and appears below.

That’s it, based on the data in our WildflyRegistry we are able to use this Chef script and shell script to create a clone of an existing Wildfly instance running on our network.

A minor update of GMapsFX has been released this week which provides a bugfix for an issue that was preventing the GMapsFX GoogleMapView component from being loaded into Scene Builder under certain circumstances.

The release number is 2.0.4 and is currently available from BinTray, and hopefully should be available via Maven Central in the next couple of days.